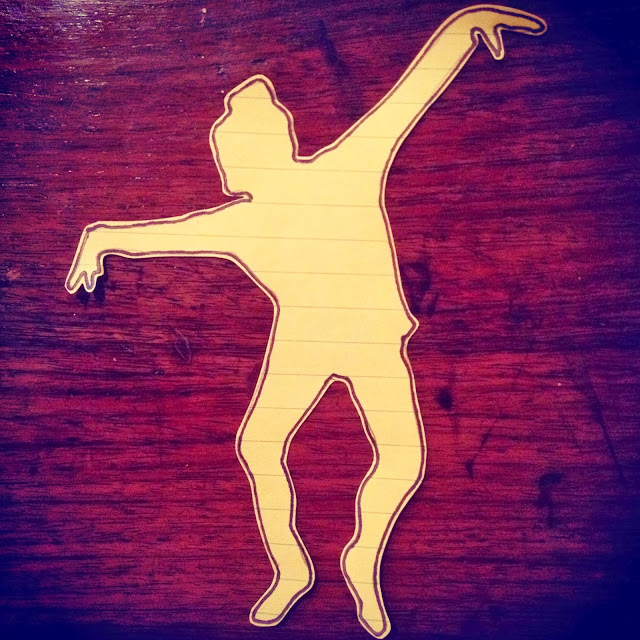 Most of Saturday was a studio day . . . I was really excited about the dance experimentation that I was doing and decided to focus my time studying the poses that I found most intriguing. I started thinking about dance and how much I like it, how celebratory it is, and how much I formally enjoy the isolated poses. So I started drawing the poses, one-by-one. And I started thinking about the beautiful Hindu gods and goddesses and lovely old textiles that I am surrounded by. The dance and movement that I have been studying does not have to actually culminate in a physical dance. In fact, I think it has potential to be much bigger than that. So when I return from Agra and Jaipur on Christmas Day, I am going to begin building a series of clay trophies. Each one with a different pose on the top of it. I'm not sure where this will lead, but I feel like there is some really good creative juice here. So I'm going to roll with it. Additionally--when playing with these shapes as I cut them out--I realized I could start laying out patterns with each movement. And I realized how similar they looked to textile patterns found in the museum here at Sanskriti. Especially the ones with stories embroidered on them . . . I haven't taken any pictures of my finished patterning yet. But it's forthcoming! Look for images later in the week! Yay! 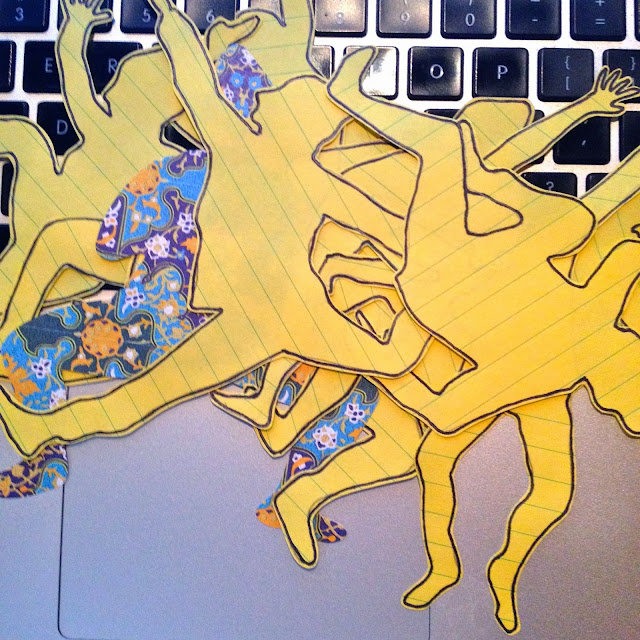 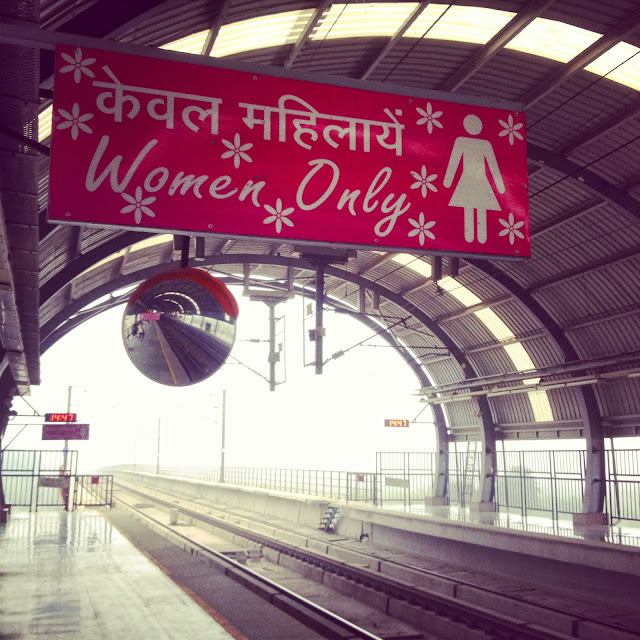 At about 2:30pm, I decided to go into town with Australian Vicki. We went to a tiny little market called Nature Bazaar. I don't know why I never noticed this before, but at all of the train station platforms are signs that say Women Only. The first two carriages of the trains are reserved for only women. At first, I was really annoyed by this. But then I realized that the two Women Only carriages are generally emptier than the other carriages, so I grew to like it. Now I specifically go to those carriages. Ha! 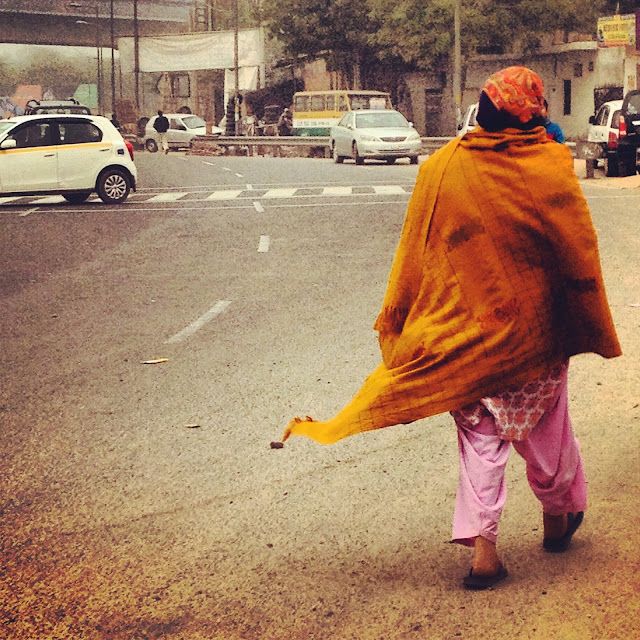 We got off the train and made our way through the dust to Nature Bazaar. It was a funky little tiny craft-based market off the street just a bit. 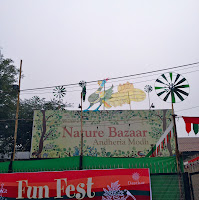 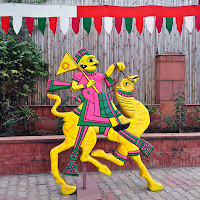 Along with food stalls, there were booths selling all sorts of things: scarves, hats, toys, fabric, clothing, and handbags. I bought a few things, but not too much. My favorite purchase was actually the chai tea that I ordered. It came in a tiny little wheel thrown cup that was unglazed. So you could sort of feel the terra cotta on your lips as you drank the chai. The combination really worked for me, especially since it was chilly outside. 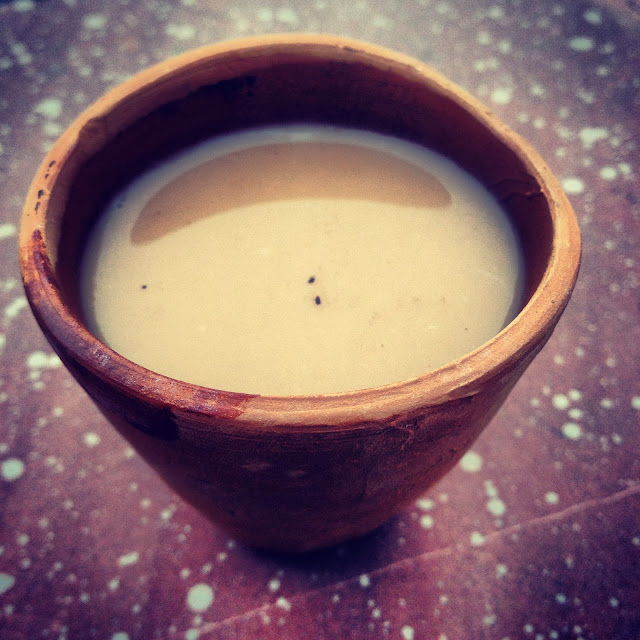 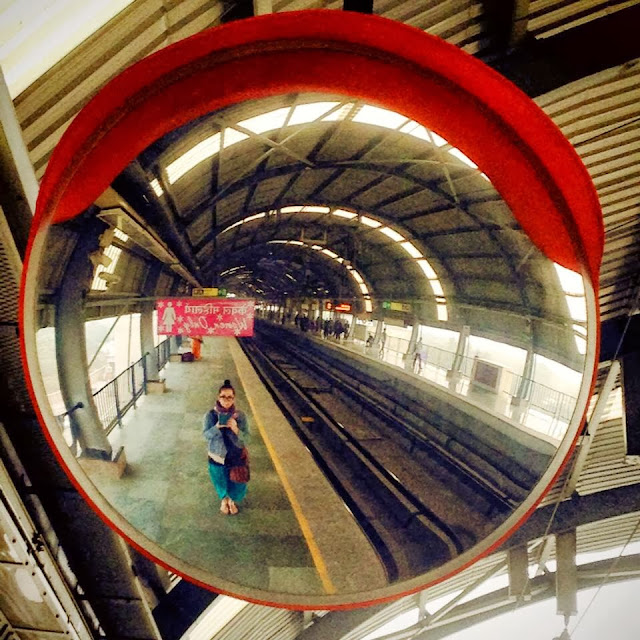 On Sunday, I went off by myself to meet up with Shikha again. This time, she was taking me to Dilli Haat. There I am, in the photo above, standing under the Women Only sign. 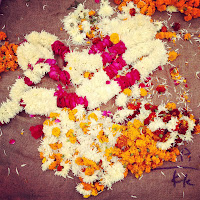 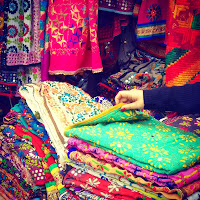 We got there around the same time, but seriously: finding another person in a city of 9 million people is almost impossible. But somehow we did it. This craft market was absolutely incredible! It was a colorful mixture of bed covers, clothing, scarves, shoes, and handbags. And the haggling! Oh my goodness. Shikha runs a hard bargain. At one point, she leaned over to me and told me to stop being so enthusiastic. I had to keep a straight face . . .

At this market, I went a little crazy. I spent less than $200 USD, but here's what I got: 2 small leather bound books, three shirts, a blanket for my bed (I think the last time I bought an actual blanket for my bed was in 1992), a green mountain bag, 2 pairs of pants, and a shawl. My favorite purchase? One of my pairs of shoes look like elf shoes. That makes me the happiest little clam alive . . . 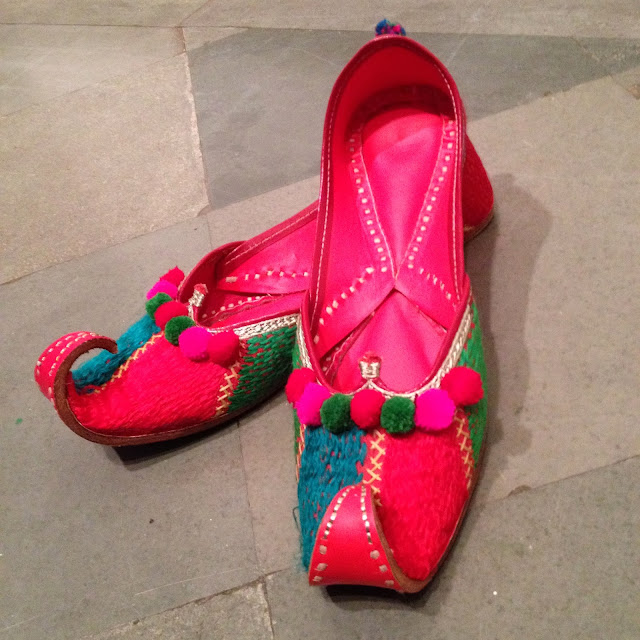 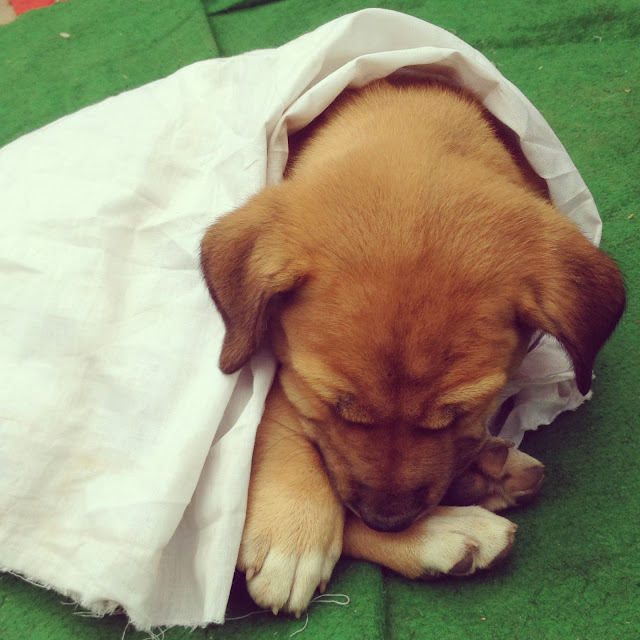 We stayed at the market until about 2pm. At that time, we went and picked up her soon-to-be daughter-in-law and headed to a wedding saree shop. Talk about being in heaven . . .

I've never seen such detailed embroidery and stitching in all of my existence. And the colors! There were so many different choices, I don't know how someone could just pick one. 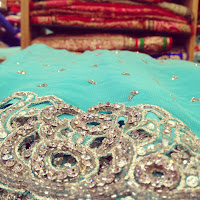 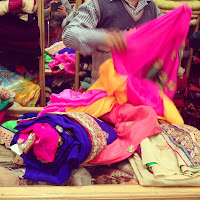 The store was really thin and long. Along one side of the store was a row of table/couch couplings. Each coupling had a salesman and a man with a measuring device. The salesman would show the sarees and pull out whatever color/pattern you wanted to see. Along the other side of the shop were several mirrors. This is where someone would dress you or wrap you up. And if you liked how you looked, you got measured and your measurements got sent off to the happy land of making. It was an incredibly interesting process to watch. The men who wrapped the sarees would quickly fold the saree in one hand while wrapping the woman with the other hand. The one hand with the folded part of the saree would unfold as the wrapping continued. I couldn't take my eyes off of anything that was happening. Floor to ceiling, on both walls of the shop, were shelves and shelves filled with sarees and fabrics. There were men employed just to fold sarees all day long. The salesmen would pull out all the sarees, and the folders would put them all back: again and again and again. And everyone was barefoot. No one had shoes on for as far as the eye could see . . . 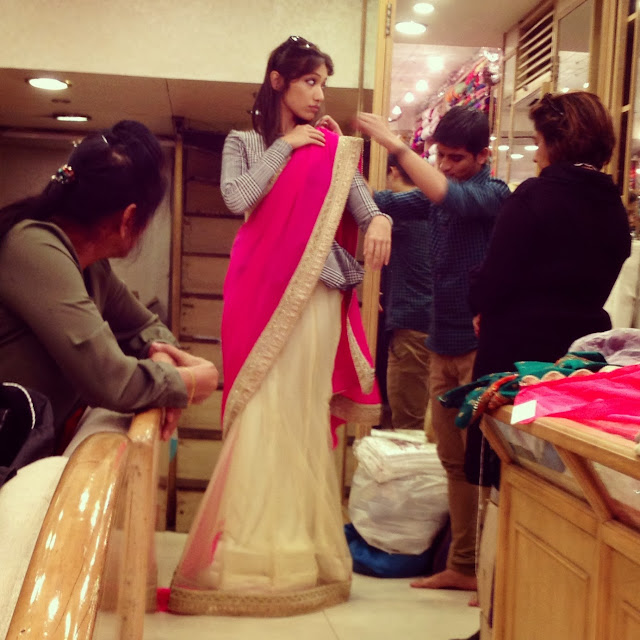 After the saree shop, I was dropped off at the train station and said my goodbyes to Shikha. The next time I would see her would be in Singapore, where her classroom is across the hallway from mine. We had so much fun hanging out together in Delhi! Can't wait until the wedding in April! What fun!

I got home and immediately Vicki and I walked down to the village and picked up some cheese in a tin and crackers. I love that little village in the evenings. It's buzzing with excitement. While she was in one of the stores, I stood outside next to a cow that was laying down on the ground. Eventually I couldn't help myself any longer, and just started petting her and rubbing her on her forehead. She liked it. We made eye contact, so I could tell. It was so funny: she just laid there while I rubbed her head. At one point, she even sort of closed her eyes and laid her head down on the ground while I was still rubbing her. I'm just amazed by these loose holy cows! Perhaps I can take one back to Singapore with me.

Tomorrow I'm off to Agra and Jaipur! Taj Mahal, here I come!
Posted by Cakecrush at 12:43 PM 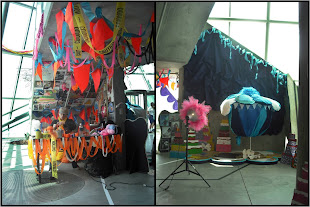 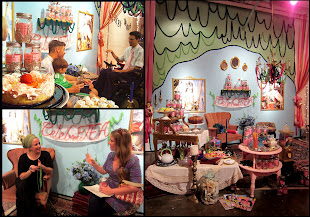 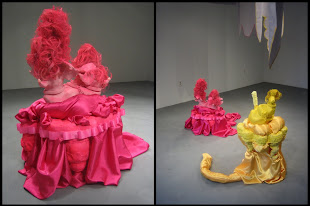 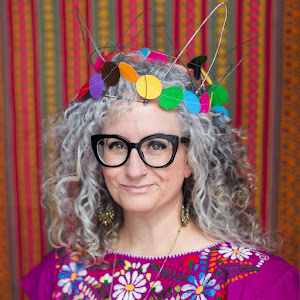 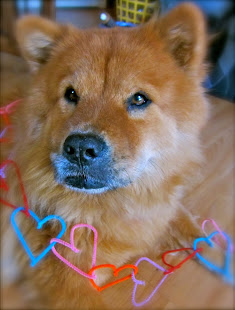 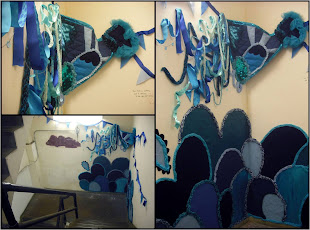 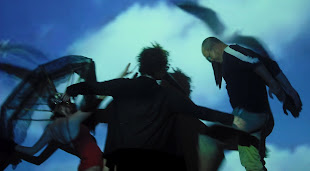 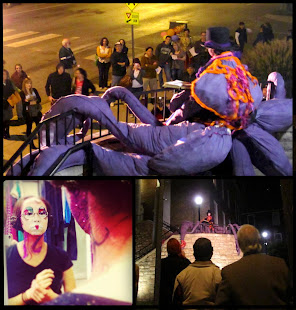 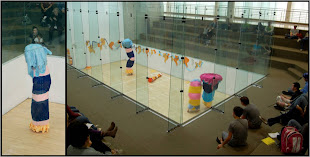 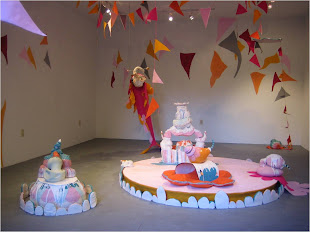 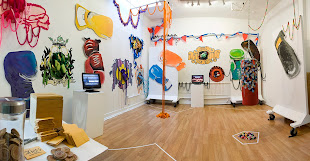